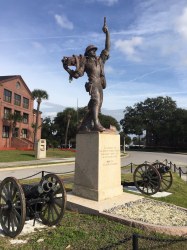 Parris Island's Iron Mike is depicted carrying a Maxim machine gun over his right shoulder and an M1911 pistol in his raised left hand. It was created as a memorial to all of the Parris Island graduates killed during World War I.

The statue itself is approximately life-sized, standing about 8 feet (2.4 m) high from the heel of his boot to the muzzle of his pistol, and is mounted on a 5-foot (1.5 m) granite base. It was created by Robert Ingersoll Aitken, the sculptor of the pediment on the United States Supreme Court Building, and cast in bronze. Officially entitled Monument to U.S. Marines, Iron Mike was dedicated in 1924 in a ceremony presided over by Commandant John A. Lejeune. Due to changes and construction around Parris Island, Iron Mike was relocated in 1941 and now stands in front of the Parris Island Headquarters and Service Battalion Barracks.

The bronze plaque, mounted on the base, reads: "In memory of the men of Parris Island who gave their lives in the World War, erected by their comrades."