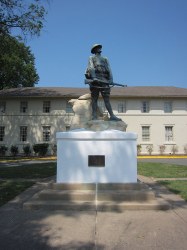 Full-length bronze figure of a World War I United States Marine. He wears a uniform with hat and boots. In his hands he holds a gun horizontally across the front of his body. His gaze is directed to the left. The figure stands on a stone base resembling a pile of stones. The back stone rises behind the figure to knee height. The sculpture and base stand on a square pedestal of concrete covered with stucco.The original sculpture, “Crusading for Right” by the French sculptor, Charles Raphael Peyre, was commissioned by U.S. Army General Pershing at the end of WWI. Pershing wanted the sculpture to commemorate the U.S. Army Doughboy. Peyre, who was not aware of the differences between the U.S. services, used a Marine Private as the model for the statue. He made the sculpture in full detail of the Marine – right down to the eagle, globe and anchor on the helmet.Army Gen. Pershing was not happy with the finished design and declined the sculpture. Fortunately, Marine Gen Smedley Butler did like the sculpture. Gen. Butler took up a collection from Marines, purchased the original full scale sculpture and had it placed in front of the Headquarters Building (Butler Hall) on Marine Corps Base Quantico where the sculpture became known as "Iron Mike".The statue was begun in 1918 and first exhibited at the Exposition des Beaux Arts of the Grand Palaise des Champs-Élysées, in Paris in May 1919. Marine Officers and Enlisted donated money to purchase the statue, and it was sited in front of the Base Headquarters, Building 1019, in Quantico, Virginia, some 75 miles from DC. Three tablets were erected in the memory of the officers and men of the 6th Machine Gun Battalion, 5th Regiment and 6th Regiment, United States Marines, "who gave their lives for their country in the World War in 1918" by the Thomas Roberts Reath, Marine Post No. 186, American Legion, on November 10, 1921. On December 8, 1921, the statue was dedicated.Today, a replica of this statue stands in front of the National Museum of the Marine Corps in Triangle, Virginia. On that statue's base is the name "Iron Mike". The original statue remains in front of Butler Hall, home of the Marine Corps Training and Education Command.