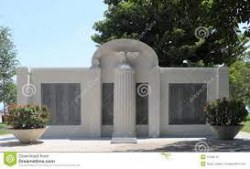 The Dade County War Memorial, by sculptor Edward Codere, was originally dedicated in Bayfront Park in 1943 with the names of eighty-seven individuals from Dade County who lost their lives during World War I. It was rededicated in 1946, with the addition of 553 names of those from Dade County who lost their lives in World War II. In November 1990, the memorial was rededicated following reconstruction due to vandalism.  The 11-foot 8-inch tall, 24-foot 6-inch wide painted stone wall is adorned in the center with bronze inscription plaques and a fluted column topped by an eagle. Quotes by Franklin D. Roosevelt and General MacArthur are inscribed on the sides.

Franklin D. Roosevelt: "It is far better to die on our feet than to live forever on our knees."

General MacArthur: "We shall win or we shall die."