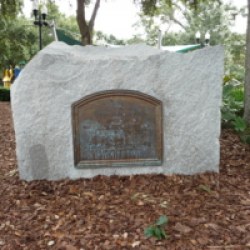 On Armistice Day 1924, the Orlando Chapter of the Daughters of the American Revolution (DAR) dedicated a granite marker to the soldiers from Orange County, Florida, who died in World War I.  Created by Carly Kittel, the marker consists of a bronze tablet attached to a large granite block and was originally erected at Memorial High School in Orlando, Florida. In the dedication address, Francis Gregory, chapter regent, proclaimed that the granite marker symbolized the solid character of the United States of America, and the bronze plaque commemorated those who made the marker possible: the DAR and the citizens of Orange County. After Memorial High School was demolished in 1961, the Orange County World War I Soldiers Memorial was moved to South Lake Eola where it still stands today.