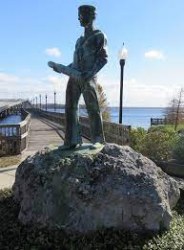 This is a set of four life-sized bronze statues commemorating World War I soldiers and sailors (three doughboys and one sailor) at the Old Memorial Bridge over the St. Johns River. The four sculptures were dedicated November 11, 1927 at the two ends of Memorial Park Bridge over the St. Johns River near downtown Palatka, and later placed in the same relative positions when the New Memorial Bridge was completed in 1976.  Depicted in these four statues are: a doughboy carrying a 1903 Springfield rifle (E.M Viquesney or Gutzon Borglum sculptor), a doughboy equipped with a Colt .45 pistol and grenade (E.M. Viquesney), another doughboy carrying a grenade and sticks of dynamite (E.M Viquesney or Gutzon Borglum), and a sailor holding a shell (E.M. Viquesney).  See pictures gallery for additional three photos.

Detecting your location...
No information to be displayed !
Single figure -- soldier
Bronze
Concrete
47260137
Standing figure of a sailor holding a cannon shell
One of four World War I figures located at the four corners of Memorial Park Bridge. The figures were originally mounted on the old Memorial Bridge completed in 1927. They were reinstalled at each end of the new bridge when it was completed in December 1976. The four World War I figures represent the three branches of the military service of that day; this figure, a sailor, represents the Navy. IAS files contain copy of dedication program from the old bridge, transcription of article from Town & Country (published by Palatka Daily News) 3 (Aug. 1964), and newspaper articles from Palatka Daily News, Sept. 11, 1979 and Jan. 16, 1991.
Administered by City of Palatka, 201 North 2nd Street, Palatka, Florida 32177 Located Memorial Park Bridge, Southwest side, Palatka, Florida