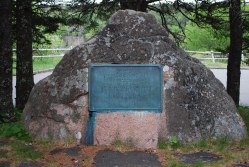 A resident and lover of Mount Desert Island who commanded the United States Naval Radio Station upon this site from its establishment on August 28, 1917 until December 12, 1919.

At the end of the World War he was awarded the Navy Cross. His citation stated that under his direction the station became the most important and the most efficient station in the world.

This tablet is erected by his friends and fellow townsmen in testimony to his patriotic service, high character and endearing qualities.