In Memory of Colonel Luke Lea 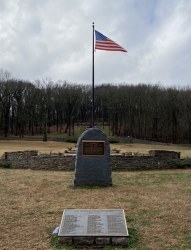 The inscription on this memorial reads:So the posterity might enjoy the benefits of a public park preserved in its natural beauty, in 1927 Colonel Lea gave the original tract of 868 acres of this land to the city of Nashville requesting that the park near the name of his late father-in-law, the late Percy Warner.Erected by officers who served under Colonel Lea in the 114th field artillery during the First World War.

After serving as a U.S. Senator from Tennessee from March 1911 to March 1917, Lea returned to Nashville and organized a volunteer military outfit which, on 6 Apr. 1917, became the First Tennessee Field Artillery. With the rank of lieutenant colonel, Luke Lea was its commander until 18 October when he became colonel of this regiment of the Thirtieth Division. An imposing military figure, colorful and daring, Lea led the all-volunteer regiment in many battles. During the lull just after the armistice and Kaiser Wilhelm's abdication, Lea and a group of younger officers made a bold trip to Holland to capture the Kaiser at his retreat. They got to the doorway of the retreat, but the coup attempt failed when the kaiser refused to turn himself over to Lea and his officers. The episode became an international incident, Holland protesting that its neutrality had been violated. Colonel Lea received the Distinguished Service Medal before his discharge on 12 April 1919.