Spirit of the American Doughboy - Axtell 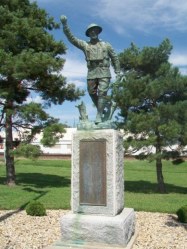 This is an E.M. Viquesney Spirit of the American Doughboy statue, installed in May 1925, depicting a World War I infantryman advancing through the barbed wire and stumps of No Man's Land, while he carries a rifle and holds a hand grenade aloft.

The monument's acquisition was initiated by the R. R. Hendricks Post 214 of the American Legion. It was dedicated in the center of the intersection May 31, 1925 and relocated in 1960 to a small piece of land that had been leased from the railroad for that purpose in 1955. The total cost was about $1,850, of which $1,175 was for the sculpture and the rest for the base, the plaque and freight. Except for $150 paid from the town treasury, it was paid for by a public subscription project that took two years of raising funds by box-socials, raffles, and other events.