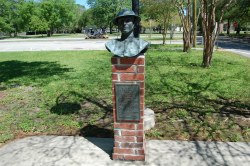 The inscription on this marker, erected in 1995 by Treasure Chest Casino, reads:

With a need for a larger army, Congress passed a Selective Service Act that made all able-bodied men between the ages of 21 and 30 subject to military service. The government put nearly 4 million men in uniform and sent about 2 million soldiers overseas as members of the American Expeditionary Force.

WWI infantrymen were called "Doughboys" because of the similarity of the buttons worn on their uniforms to a popular Civil War era doughnut called a "doughboy".