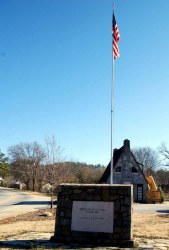 The Veterans Service Station was built in 1935 using local stone from the nearby Liberty Rock Quarry. The cornerstone of the building indicates that it was built by "CA_JC, & JS Newton". A marble plaque on the side of the building lists the mayor, council and other public figures at the time of the building's dedication, and also gives a history of the town, which claims that the town of Liberty was "founded in 1776 by a group of patriots." While this history is etched in granite on the building, it contradicts what is generally known about the area during the colonial period, when all of the land in Greenville, Anderson, Oconee, and Pickens counties was still Cherokee Territory.A granite monument was erected next to the Veterans Service Station by Dr. E.J. Bryson soon after the building's completion. The monument includes a flagpole, lists the names of the local soldiers who fought in the first World War, and is "Dedicated to Veterans World War". The marker was struck by an automobile and broken in pieces many years ago. The pieces were collected by Mrs. Julia Jean Woodson, who kept the broken monument under a magnolia tree at her home on Main Street. In 2002, a Liberty councilman, Rick Clark, recovered the broken monument pieces from Mrs. Woodson, had them repaired and returned to the Veterans Service Station site.