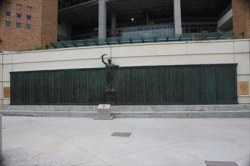 In 1924, the football stadium at the University of Texas was first dedicated as a memorial to the nearly 200,000 Texans who served in WWI.This memorial is made up of two parts -- a bronze statue of Democracy on a pedestal with a bronze plaque and a set of large bronze tablets behind her listing the names of all 5280 Texans (male and female) who died in military or national service during WWI.The plaque in the base of the monument reads as follows:To honor the memory of all the Texas men and women who lost their lives in the service of their country during the World War.What we seek is the reign of law, based upon the consent of the governed and sustained by the organized opinion of mankind.Woodrow Wilson

The memorial was re-dedicated in November 1977 to honor all veterans.