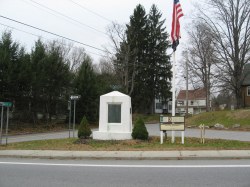 Patterson was still a quiet country town at the beginning of the First World War. Although the State had begun to assume responsibility for the major roads through the area, three-way intersections like this one, more typical of wide turning horse-drawn wagons than automobiles, with triangular islands in the middle were still common. There was electric power in town and some people had telephones, but in many ways Patterson was a typical American small town, isolated from the outside world and especially from the passions and politics of Europe.It is difficult for us to imagine the impact which the experience of the First World War had on the lives of the men whose names are listed on the south face of this monument and on the lives of their friends and families. Many had left home for the first time to fight in the largest conflict the world had yet seen. Three of them did not return. This monument was erected to all who served and it continues to be the focus of parades and Memorial Day ceremonies to this day.The American Legion was formed in Paris in 1919 immediately after the end of the war. They adopted a constitution at their convention in St. Louis the same year which stated, among other things, that part of the Legion’s purpose was to “consecrate and sanctify our comradeship by our devotion to mutual helpfulness.” It is largely through the volunteer efforts of individual members of the Patterson Post of the Legion that this monument and the ground around it has been maintained.