Spirit of the American Doughboy - Liberty 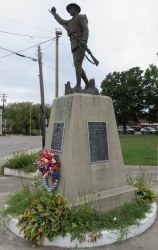 This statue was sculpted by E.M. Viquesney and dedicated on November 11, 1935.  It depicts a WWI infantryman advancing through the barbed wire and stumps of No Man's Land.  It was shattered on July 4, 1982 in a truck accident and recast the following year, and again dedicated on November 11, 1983. A 1935 plaque honors the memory of the citizens of Casey County who died in service in WWI.

The inscription on the plaque on the front of the concrete base reads:DEDICATED TOTHE MEMORY OF OUR COMRADESWHO ENTERED THE SERVICEOF THEIR COUNTRYFROM CASEY COUNTY, KENTUCKYAND WHO GAVE THEIR LIVESIN THE WORLD WAR.ERECTED BY THE CITIZENS OFCASEY CO. AND ELSEWHEREUNDER AUSPICES OFCASEY POST NO. 78, AMERICAN LEGIONNOVEMBER 11, 1935An inscription on a plaque on the back of the base reads:THOSE WHO MADETHE SUPREME SACRIFICEDURING THE WORLD WAR1917-1918CASEY COUNTY, KENTUCKY(followed by list of 32 names in two columns)