In Memory of Henrietta I. Drummond 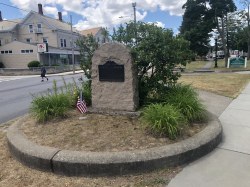 BIND THE WOUNDS THAT BLED." WHITTIERERECTED IN 1937 BY HENRIETTA I. DRUMMOND POST & AUXILIARY, THE AMERICAN LEGION.

In the waning days of World War One, Henrietta Isabel Drummond, 25, of Pawtucket, RI, USA, made her way across the Atlantic Ocean to serve as a Red Cross nurse. Her parents were from Glasgow.

"I am having a wonderful time here," she wrote to her mother from aboard the Balmoral Castle, "and it will be a trip to remember. " They were to be the last words that Jean Drummond would ever receive from her daughter.

Having graduated in 1917 from the St Joseph Hospital School of Nursing, in Providence, RI, Henrietta Drummond trained in South Carolina and then made the submarine-menaced voyage from New York to France, arriving on October 4, 1918.

Assigned to a hospital in Nevers, in central France, Drummond worked 15-hour days caring for soldiers who had been gassed, who had not eaten in days, who had lost arms and legs, whose wounds had been left to bleed. As the nursing went on, a piercing whistle would signal enemy planes overhead - the threat of attack was constant. (Shortly before Drummond's arrival, a shot from a long-distance gun had struck a maternity hospital, killing 50 babies.)

The other constant danger in the soldiers' hospital was infection. And indeed on October 10, just six days after her arrival and a month before the war's end, Henrietta Isabel Drummond died, of either typhoid fever or Spanish influenza.