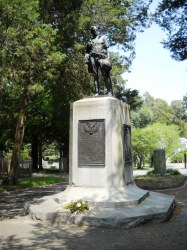 This monument, dedicated in 1931, is a life-sized bronze statue of a WWI soldier dressed in a field uniform, carrying a jacket over his right arm and a helmet and rifle in the other.  Beneath is a multi-tiered granite base decorated with inscribed plaques listing the 41 men of Suffolk and Nansemond County who died during World War I.  The inscription reads:

1917-1919They sought not glory, but their country’s good and died that right, which is more precious than peace, might prevail.(side)This tablet is erected as a tribute to the men of Suffolk and Nansemond County, Virginia who died in the service of their country in the Great War.

This monument was located originally at the intersection of North Main Street and Milner Road (probably, present-day Constance Road). It was later moved to Cedar Hill Cemetery’s entrance due to an increase in traffic.