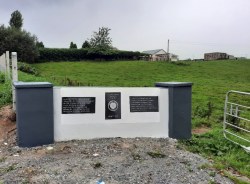 This roadside memorial, unveiled in September 2021, pays homage to those who served at a World War I U.S. Army base in Inishowen, Donegal.

The Naval and Air Station at Ture, Quigley’s Point, was in operation for less than a year but served as a base for a number of attacks against the Germans and housed more than 400 servicemen (see photo of original army base in Pictures Gallery).

A number of local men helped with its construction from January, 1918. The station opened on September 3, 1918, and formally closed on February 22, 1919. During the operational life of the base a total of 27 patrol flights, 12 training flights and 9 test flights were made. Ten convoys were escorted, and two U-boats were attacked. Ten pilots, 10 ground officers and 432 enlisted men were attached to the base.

Local farmer, Gordon Rankin, on whose land the base was built, permitted the erection of three memorial plaques on the entrance to one of the fields that was used for the facility. To this day, the field contains the last remaining building of the base.

The plaques, on the main R238 road between Moville and Muff, give the details of the former base and operations of the five ‘Large America’ Curtiss flying boats that operated there.