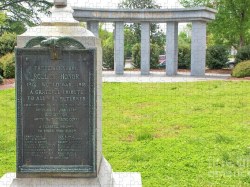 There are 6 granite slabs arranged in a semi-circle with a granite capstone and frieze that bears the words OUR FALLEN HEROES in bronze letters. The names of 400+ veterans from Caroline, King George, Orange, Spotsylvania and Stafford counties, and Fredericksburg, who died in service are inscribed on separate panels representing World War I, World War II, Korean War, Vietnam War, and the Global War On Terror (Iraq and Afghanistan). The names are suitable for tracing similar to the Vietnam Veterans Memorial in Washington, D.C. This structure was designed and donated by the Potomac Region Veterans Council. A Walk of Honor, which leads to it on either side, is paved with inscribed bricks bearing the names of soldiers not eligible for inclusion on the memorial.

Also included on site is a Navy anti-aircraft gun and existing flagpole with a plaque bearing a Roll of Honor to those who served in World War I.