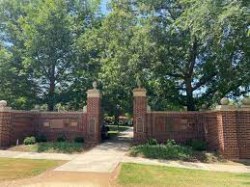 Memorial Gate was built in 1921, to honor Hampden-Sydney alumni who gave their lives for their country in the Great War. Queen Mary of England sent rosebushes to be planted behind it; they survived until the 1960s. Since the 1970s, the gate has become a memorial to alumni who had died in all the country's wars. It now includes plaques for fallen heroes of the Revolution, the War of 1812, the American Civil War, the Spanish-American War, World War I, World War II, the Korean War, the Vietnam Conflict, and September 11, 2001.