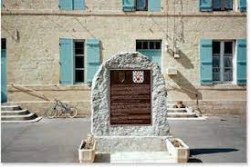 The memorial is a stone stele with a bronze plaque containing text and the symbol of the 16th Infantry Regiment.  The inscription reads:

This plaque is dedicated to the men of the 16th Infantry Regiment who fought so gallantly during the heavy fighting in the Meuse-Argonne and who on October 4, 1918 liberated the village of Fleville from the Germans. During the Battle of the Meuse-Argonne and the liberation of Fleville, twenty-seven men of the Regiment received the Distinguished Service Cross, America's second highest award for gallantry in action. It was after the liberation of Fleville, that the 16th Infantry Regiment adopted the Blue and White Fur Vair shield from the town's Coat of Arms, as the background for its Regimental Crest. That crest has been worn proudly by members of the Regiment for over eighty-years and has seen service in World War II, the Cold War, Vietnam, in the deserts of Saudi Arabia, Kuwait and in Bosnia. The Regiment stands ready to serve again with pride and distinction. SEMPER PARATUS - ALWAYS PREPARED.

The Regiment and the village of Fleville must never forget the heroic actions of those men and their dedication to their country and the ideals of freedom. We must always remember that - FREEDOM IS NEVER FREE. In this small French village in 1918, the price of Freedom was very high.