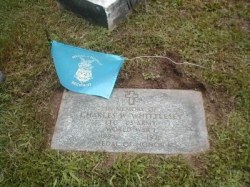 This marker is in memory of Charles White Whittlesey, a U.S. Army Medal of Honor recipient who led the "Lost Battalion" in the Meuse-Argonne Offensive during World War I.  As a major in the 77th Division, 308th Battalion, Whittlesey and his men were surrounded by the Germans from October 2 until October 7, 1918 in the Argonne Forest.

"Although cut off for five days from the remainder of his division, Major Whittlesey maintained his position, which he had reached under orders received for an advance, and held his command, consisting originally of 46 officers and men of the 308th Infantry and of Company K of the 307th Infantry, together in the face of superior numbers of the enemy during the five days. Major Whittlesey and his command were thus cut off, and no rations or other supplies reached him, in spite of determined efforts which were made by his division. On the 4th day Major Whittlesey received from the enemy a written proposition to surrender, which he treated with contempt, although he was at the time out of rations and had suffered a loss of about 50 percent in killed and wounded of his command and was surrounded by the enemy."

At the end of the ordeal, out of 550 men, only 194 were left alive and unwounded. In recognition of his valour, Whittlesey was made a Lt. Colonel and, along with his captains McMurtry and Holderman, awarded the Congressional Medal of Honor.

After the war, Whittlesey returned to law practice (he was a graduate of Harvard Law School). In November 1921, he booked passage on the S.S. Taloa, a steamer bound for Havana, Cuba. On Nov. 26, he dined with the captain and left the smoking room at 11:15 pm, stating he was retiring for the evening. It was noted by the captain that he was in good spirits. Whittlesey was never seen again. He is presumed to have jumped overboard; his body was never recovered. He left no explanation, but had written his will in New York before embarking on the journey and also left several letters in his cabin addressed to family and friends.

This memorial is an 'In Memory Only' marker, as Whittlesey's body was never recovered.  In addition, Whittlesey is also named on the family monument in the Pittsfield Cemetery.

For more on The Lost Battalion, see: https://www.worldwar1centennial.org/index.php/233-lost-battalion.html