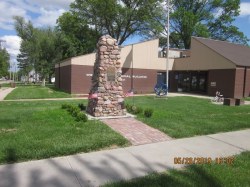 The monument was originally constructed in the Milford City Park in 1931 by the members of Milford’s American Legion Post 171 and dedicated on May 30, 1931. It was constructed of field stones collected from local farms. Each of the 52 Legion members was asked to bring 2 stones for the monument. There was a water fountain built into one side and a plaque above the fountain that read “In Memory, of Those Who Served, 1917 World War 1918, Milford Post 171, the American Legion, Milford, Nebr. May 30 1931”. In early 2012, the city maintenance crew inspected the monument and found it to be in disrepair and possibly dangerous. The water fountain was no longer in use and had probably contributed to the decline. It had always been a favorite climbing spot in the park for children and it was felt that it was no longer safe. After consulting with several qualified masons, it was determined that repair wasn’t really a good option. The cracks and structural issues meant that it wasn’t a good candidate for being moved. A consensus was reached that the best thing would be to disassemble the monument and rebuild it at another location in the park. The monument was disassembled by the city maintenance crew and the stones and plaque put into storage. Inside the monument was found a glass jar with a typed list of the Legion and Auxiliary members from 1931.It was decided to build the memorial back (as close as possible) to the way it had been, but leave out the water fountain. A nice visible corner in front of the community and library building was chosen. This was more visible and away from the playground equipment. The city had supplied the labor to tear down the old monument, but they thought that the Legion should pay for rebuilding it. $5,500 was raised for the reconstruction.In May of 2012 the monument was reconstructed. This time it would have a nice solid concrete base, a steel internal support structure, the stones from the old monument, the plaque from the old monument and a new rededication plaque.In the spring of 2019, the mayor of Milford gave some money to plant some grass, small bushes, and street bricks for a walk way up to the monument.