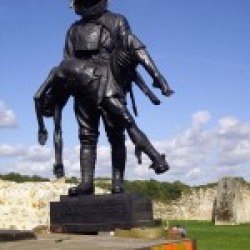 Inaugurated in November 2012, this Memorial of the 42nd Division commemorates the 162 soldiers from Alabama and their Iowa comrades who died on the battle field of the Croix Rouge Farm as well as all the soldiers of the Rainbow Division who gave their life for France during the Great War. Created by British sculptor James Butler, MBE (RA), it was erected by the Croix Rouge Farm Memorial Foundation (Montgomery, Alabama) and was donated to the city of Fère-en-Tardenois, so that the bronze soldier who carries the body of his dead comrade remains forever the witness of the sacrifice made by young Americans on July 26, 1918, and so that it remains for future generations a symbol of French-American friendship and a call for peace among nations.

For background on the memorial, see: https://croixrougefarm.org/the-sculpture/