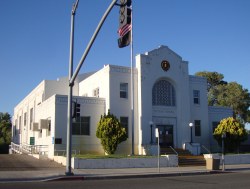 This Veterans Memorial building was erected in 1926 in honor of all World War I veterans and future veterans who have served the U.S. and Lassen County, CA. The building hosted the American Legion State Convention August 15-19, 1926. More than 2500 attended the convention, doubling the size of Susanville.

The inscription on the building reads:

Constructed and dedicated to honorthe Veterans of World War Iand all future Veterans who have served theUnited States of America and Lassen County,Constructed February through August of 1926 andDedicated on August 17, 1926