The Sergeant Stubby Memorial at the CT Trees of Honor Memorial 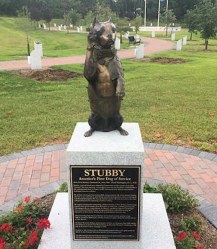 Pvt. J. Robert Conroy befriended a stray pup as his infantry regiment trained on the Yale University campus in the summer of 1917. Naming the mutt Stubby, Conroy somehow smuggled him to France where he became the regiment's mascot. Stubby participated in 17 battles, was wounded twice, saved countless lives by smelling mustard gas before it arrived, and once captured a German spy by biting him on the butt (Stubby had an uncanny ability to identify Germans). He was renamed "Sergeant Stubby," returned home as a war hero, and met President Woodrow Wilson, who shook his paw.

On Memorial Day 2018, this life-size bronze statue of Sgt. Stubby was unveiled in his home state of Connecticut. The sculpture by Susan Bahary depicts Stubby giving a salute, a trick that endeared him to Conroy's commanding officer. He wears a vest that was made by the grateful women of France, to which were pinned Stubby's many medals. Stubby was the most decorated dog of World War I.