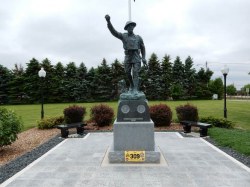 This E.M. Viquesney Spirit of the American Doughboy statue was erected in Markesan in 1946 by August Hein (apparently purchased from another community although the details of how Mr. Hein acquired the statue are not known).  Originally standing in Hen Park, in 2007 the statue was moved to Grand River Memorial Park, and is now under the care of American Legion Post #282. The Doughboy was restored and rededicated in the summer of 2009, Before the restoration, most of the rifle was missing. The statue and its original stone base are now mounted atop a new pedestal in Grand River Memorial Park, in an area known as North Terrace on the grounds of Markesan Resident Home.