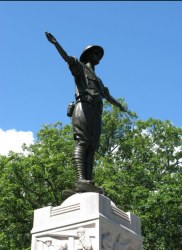 This memorial is located in Oak Grove Cemetery, at the top of the set of stairs at the intersection of Winthrop Street and Playstead Road. The memorial overlooks the graves of WWI veterans. It consists of a statue of a battle-weary soldier standing with his arms extended horizontally, as if embracing the grave sites in front of him. His uniform is torn (from the experience of the battle field), and his gun is holstered (a source of controversy because some thought the memorial was not “warlike enough” but Mayor John J. Irwin supported the artist’s interpretation). The names of seventy-nine heroes are inscribed around the base. In addition, a “treasure trove box” filled with memorabilia was hermetically sealed in the pillar’s center cavity. The memorial was dedicated in May of 1941, just before the country was about to enter World War II.

Around the top of the pillar are panels that represent scenes from the war, which includes taking care of the wounded. Four patriotic eagles protect the monument.

The artist, Emilius Ciampa (1896-1996), a WWI veteran himself, was selected to design and create the monument. He is buried in Oak Grove Cemetery and his tombstone indicates he designed both the WWI and WWII memorials in the cemetery. The WWII memorial at the cemetery is near the entrance and is a statue atop a pile of rocks in a pool of water.