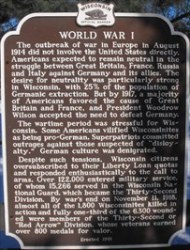 This historical marker describes how Wisconsin struggled during World War I. It is located in a rest area on westbound I-94 between exits 41 and 45 near Menomonie, WI. The marker reads:

"World War IThe outbreak of war in Europe in August 1914 did not involve the United States directly. Americans expected to remain neutral in the struggle between Great Britain, France, Russia and Italy against Germany and its allies. The desire for neutrality was particularly strong in Wisconsin, with 25% of the population of Germanic extraction. But by 1917, a majority of Americans favored the cause of Great Britain and France, and President Woodrow Wilson accepted the need to defeat Germany.The wartime period was stressful for Wisconsin. Some Americans vilified Wisconsinites as being pro-German. Super-patriots committed outrages against those suspected of "disloyalty." German culture was denigrated.Despite such tensions, Wisconsin citizens oversubscribed to their Liberty Loan quotas and responded enthusiastically to the call to arms. Over 122,000 entered military service, of whom 15,266 served in the Wisconsin National Guard, which became the Thirty-Second Division. By war's end on November 11, 1918, almost all of the Wisconsinites killed in action and fully one-third of the 6,300 wounded were members of the Thirty-Second or "Red Arrow" Division, whose veterans earned over 800 medals for valor.Erected 1991"