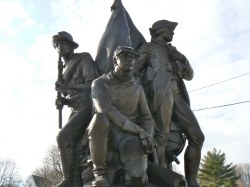 Donald F. Curran, a Danbury resident who won a design competition, designed this bronze sculpture of four soldiers and a sailor encircling a flagpole.  The World War I soldier stands with his leg slightly extended, left arm raised to his waist.  The Spanish-American War soldier crouches and holds a rifle.  The Civil War soldier kneels, holding a sword.  The soldier from the Revolutionary War holds a bugle and flagstaff.  The sailor is kneeling and holds signal flags. This memorial was originally dedicated in 1931 to honor Danbury's citizens who fought in the four wars represented, and a plaque was added in 1952 to include World War II.  A dedication at the monument’s base reads: “Dedicated to the soldiers and sailors of Danbury”.

Detecting your location...
No information to be displayed !
Group