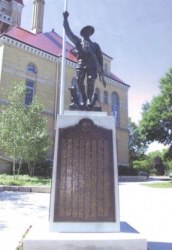 The inscription on the plaque on the front of the pedestal reads:

The inscription is followed by a listing of names that continues in multiple columns on all four sides. It includes 1,054 who served in the Civil War and 33 who served in the Spanish American War. There are 1,469 names of those who served in World War I – 1,337 Army, 114 Navy, 10, Marine, 8 Nurses.

The Doughboy was dedicated Sunday November 13, 1927 in an observation that included a major parade with veterans of the Civil and Spanish American Wars in autos, and walking veterans of the World War. National Commander of the American Legion, Edward E. Spafford, spoke at the dedication.

A nearby monument was placed in 1998 to recognize those who served in World War II, Korea and Vietnam. It names 79 who gave their lives in World War II, 21 in Korea and 28 in Vietnam. The area also has granite markers honoring 23 County veterans groups or organizations.

A major restoration project led by the Washington County Historical Society was performed by Tony Rajer of Fine Arts Conservation Services, Madison, Wisconsin, in 1999-2000, and the Doughboy was rededicated May 30, 2000. A time capsule placed in the Doughboy’s pedestal when it was erected, but of which there was no known record, was found during the restoration. Its contents included a list of about 4,000 school children, from over 100 county schools in several townships, who made small contributions totaling $253 of the $6,000 original cost of the sculpture, pedestal and site improvements (about $4,000 was paid by the County and the rest by popular subscription).