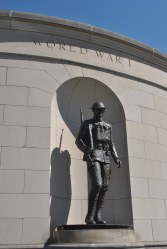 The West Virginia Veterans Memorial was designed by Charleston native P. Joseph Mullins, and built in stages from 1990-1999. The monument honors the over 10,000 West Virginian soldiers who lost their lives in the service of their nation. The memorial was originally funded by private donations and completed with the support of the state legislature. Though the memorial honors all West Virginian veterans, inscribed names are limited to four twentieth century conflicts for which data on West Virginian service exists: World War I, World War II, the Korean War, and the Vietnam War. The Veterans Memorial is a popular gathering place for events and ceremonies that involve veterans.

Detecting your location...
No information to be displayed !
Nell Rapport