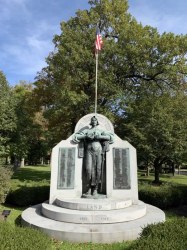 This statue, installed on December 11,1926, honors the 278 men from Highland Park who died in World War I.

From Bach & Gray Chicago's Public Sculpture:  "An heroic bronze female figure symbolizing World War I stands against a granite backdrop. Bronze tablets at both sides of the figure list the names of servicemen from Highland Park who lost their lives during World War I. The monument was designed by James Cady Ewell, who was primarily a watercolorist. Ewell was born in Chicago and studied at the School of the Art Institute of Chicago. He made sketching tours of the U.S. and Europe and had a one-man exhibition at the Art Institute in 1919. After many years as advertising manager for Wilson and Company, meat packers, Ewell retired to Florida, where he died at the age of seventy-three.