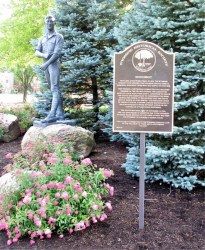 Not long after World War I, in 1923, the Wyoming Women’s Club decided that Wyoming should erect a memorial honoring those who had served in that war. They formed a testimonial committee that included members of the village council. The committee selected local sculptress Mary L. Alexander to create the statue and raised $5,000 to commission the work. During this period, it was decided that the statue should honor all who served - the idealistic spirit of America’s youth. It shows a young man rolling up his sleeves ready to work without a rifle or the uniform of a traditional doughboy. The statue was dedicated on November 11, 1926, the 7th anniversary of Armistice Day. It was unveiled by Mayor Frank Bonham on the lawn of what was then the Wyoming Women’s Club where it stands today. This plaque is presented by the Wyoming Women’s Club on the occasion of their 100th Anniversary
1916-2016