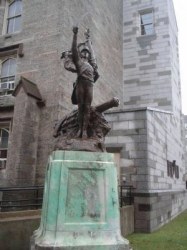 Erected in 1919, the inscription on this monument reads:

Previously it had graced old Diagonal Walk, before the near doubling of the size of the Corps of Cadets in the mid-sixties forced the movement onto The Plain of that esteemed walk. It now stands next to the 1st Division of Old Central Barracks, the only portion of that ancient structure to survive the expansion of Washington Hall and the addition of the MacArthur and Eisenhower wings of barracks necessitated by the larger Corps. It officially is known as The French Monument, but in an earlier day it was nicknamed “The Gold Tooth” because it was coated in gold leaf. Unfortunately, it was not immune to a midshipman’s prank that doused the statue in Navy blue paint prior to an Army-Navy football game many years ago. It, like the original in France, now boasts a blue-green patina. (Note since this publication the Statue has been painted)Many older graduates recall, as plebes, being required to cite the mistakes attributed to the sculptor of the statue: the cadet’s saber is curved but his scabbard is straight; the wind is blowing his coat tails in one direction and the flag in another; the cannon balls at the base are larger in diameter than the bore of the cannon behind the cadet; and, horror of horrors, the brave cadet has a button unbuttoned! And in combat, no less. And thereby hangs a tale.For the original statue of the staunch little French cadet, proudly holding his colors and bravely brandishing his saber, was created by Corneille Theunissen and dedicated in July 1914 to mark the centennial and commemorate the courage of the cadets of L’Ecole Polytechnique in France when they were mobilized to help defend Paris in 1814. The motto upon the statue reads, “Pour la Patrie, les sciences et la glorie” In the end, Paris fell, and Napoleon was forced to abdicate. Nevertheless, the 1814 statue stands proudly on the Court of Honor at L’Ecole Polytechnique. The cadets, however, again would play a role in the Revolution of July 1830 that deposed Charles X.In December 1830, no less a personage than the aged Marquis de Lafayette visited L’Ecole Polytechnique to present a letter of fraternal congratulations from the West Point cadets to the Twenty-ninth of July cadets “our brothers in arms and our co-partners in the defence of that sacred Liberty”. The French cadets sent an equally cordial and respectful reply. Sometime in 1918, the discovery of these letters in the papers of Marshall Bosquet, one of the French cadets who signed the 1830 letter, led to two independent actions.In May of 1918, the cadets of L’Ecole Polytechnique sent a letter of gratitude confirming the ties between France and the United States in the Great War. They also had a miniature of the 1814 statue created for presentation to the cadets of West Point. The Corps sent a warm letter back, citing the historic links between the two countries. Both letters were published in the Howitzer, along with a photograph of the statuette. The West Point cadets who answered the letter on behalf of the Corps, however, soon graduated a year early in June 1918 and were preparing to assist France in battle. The next two classes were combined into a mega class and graduated soon afterwards, on 1 November 1918 – just ten days before the Armistice. After a tour of the European battlefields, the younger class was recalled to West Point for additional academic training, graduating again on 11 June 1919.Also in 1918, Les Amis de l’Ecole Polytechnique (equivalent to our Association of Graduates) determined that they would raise funds to present a full-size casting of the statue to West Point. On 21 October 1919, after Douglas MacArthur had arrived as Superintendent (12 June 1919), France sent a military mission to help dedicate the statue at West Point. Among the delegation was Marshal Foch. The base is said to be of stone from Verdun, with relics from the Marne battlefield inside. When the Washington Hall mural was painted in the thirties, represented in the lower right corner is Joffre at the Marne. An earlier proposal depicted Foch at the Marne.The Class of 1920 that presided over the dedication of the statue had not yet reported to West Point when the letter of May 1918 and the miniature statue had been received. The installation of the full-sized statue evidently was considered a minor event in the great sweep of things and received only a mention, sans photo, in their 1920 Howitzer. No specific date, no mention of dignitaries in attendance – although much was made of the autumnal visits by King Albert and Crown Prince Leopold of Belgium and the Prince of Wales. Of course, these personages were able to grant amnesty to the Corps, and the statue was not. While King Albert was the first reigning monarch to have visited West Point, the Prince of Wales took the added step of joining the Corps of Cadets for dinner in the mess hall. After delivering a short address, he was honored with a Long Corps Yell.Looking deeper into the 1920 Howitzer, however, one finds another mention of the statue in the History of the Class of 1922. It is a facetious reference to upper classmen “crawling” the French cadet for not wearing a B-plate until a plebe informs them that the statue represents a “French soldier, Revolution of 1830, sir.” Of course, the plebe is wrong, but there is a reason (not an excuse) for his confusion. It was the letters regarding the Revolution of 1830 that prompted two separate groups to provide statues commemorating the 1814 defense of Paris to West Point. Fortunately, this 1922 class history does include a photograph of the installed statue, beneath a tree and facing the barracks, with The Plain, the flagpole, and Battle Monument in the background.