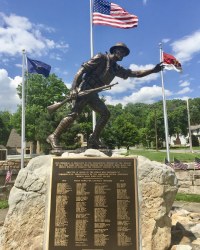 This memorial was dedicated by the American Legion Auxiliary on June 14, 1925 and was rededicated after repair and refurbishing on May 3, 1988. The inscription reads:

This memorial is dedicated to the everlasting memory of the heros of all the wars who by their heroism and sacrifice have made the United States of America the foremost country of the world.

Erected in honor of the World War Veterans of Curwensville, Pennsylvania by the American Legion Auxiliary, John E. Sipes Post No. 505.

[Followed by a listing of names]

Those who made the supreme sacrifice
Di Pasquali, Alfonzo • Ferguson, Robert • Haddon, Clair. • Pistilli, Mariano • Predellini, Ferdinando • Salvatore, Mingnoui • Sipes, Joshua EarlIn a righteous cause they have won immortal glory and have nobly served their nation in serving mankind.