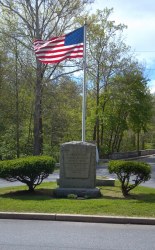 In Memory of
James L. Killen, Jr.
Jesse S. Mills
Rockdale Boys who died in Action
in the World War 1918

Erected by Their Neighbors of
Aston & Middletown Townships [Rear of Marker]
Roll of Honor
In Honor of those of this community who Patriotically responded to the call of their country in defense of the Liberties of mankind.
“These gallant men of our Armed Forces have fought for the ideals which they knew to be the ideals of their country”
Woodrow Wilson - 1918

Erected by: The Glen Riddle Branch of the Emergency Aid of Pennsylvania