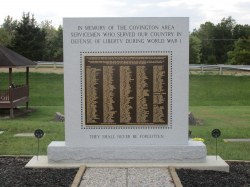 In every war since the founding of this country, citizens of Newbury Township have served in the Armed Forces of the United States of AmericaMany Covington-area servicemen in World War I joined Company A 3rd Infantry Regiment Ohio National Guard at the Armory in Covington. On September 15, 1917, that unit became the 145th Infantry Regiment 37th Infantry Division (the “Buckeye” Division) of the U. S. Army. This Regiment fought in major battles in France and Belgium, and suffered heavy casualties.Two soldiers from Covington were awarded the Distinguished Service Cross by the President of the United States for ”Extraordinary Heroism in action” during the war. First Sergeant Luther J. Langston and Major William L. Marlin Commander of the 3rd Battalion of the 145th Infantry Regiment. Both are buried in this cemetery.

The inscription on the memorial reads: