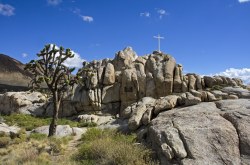 The Mojave Cross was erected in 1934 on Sunset Rock in the Mojave National preserve as a memory to those who were killed in action during World War I.

The memorial was closed in 2002 after court rulings declared it illegal because of separation of church and state constitutional concerns. On April 28, 2010, the U.S. Supreme Court ruled on Salazar v. Buono in a 5–4 decision that sent the case back to a lower court. The high court ruled there was no violation of the separation of church and state when Congress transferred the land surrounding the cross to a veterans group. Writing for the majority, Justice Anthony Kennedy wrote, "The goal of avoiding governmental endorsement [of religion] does not require eradication of all religious symbols in the public realm".

In April 2012, a land exchange to privatize the area -- transferring it to the Veterans of Foreign Wars -- was approved by the U.S. District Court for the Central District of California. On November 11, 2012, the cross was rededicated by local citizen Henry Sandoz in a Veterans Day ceremony.