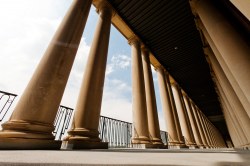 Memorial Stadium was built in 1923 to honor University of Illinois men and women who gave their lives serving in World War I. There are a total of 200 columns on the east and west sides of the stadium. 183 columns display one name of a University of Illinois student that lost their lives in the first war (182 men and 1 woman).  In addition, carved stone panels were placed on the facility's exterior to commemorate the war and to honor athletic achievements.  In 2002, the stadium dedication was extended to those who died in World War II. The stadium was officially dedicated on October 18, 1924, on which the university football team played a homecoming game against the University of Michigan. On way to a 39–14 Illini victory, Red Grange scored five touchdowns in one of the greatest single-game performances in football history.