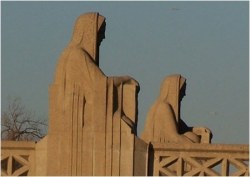 Aurora’s New York Street Bridge, constructed in 1931 and spanning the Fox River, is dedicated as a tribute to the brave soldiers who fought in World War I. The bridge features six ornamental elements - four hooded “Memory” sculptures, a statue celebrating “Victory,” and the Branches of Service Plaque, a large bronze relief representing the three branches of the armed services at the time of WWI. At the center of the bridge there are two outlooks with bronze and limestone memorials. On the north side stands a 12-foot bronze statue of the Messenger Goddess Victory on top of a 10-foot limestone base. The bridge was recently restored, with a grant from Landmarks Illinois, to commemorate the 100th anniversary of the United States' entry into World War 1.