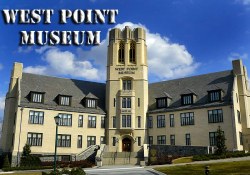 In addition to the main museum building in Olmsted Hall, the Museum also administers Fort Putnam which it operates seasonally. The Museum also maintains part of its collection on display on Post with the cannon collection on Trophy Point, The superintendent portraits in the Cadet Mess and artwork in many of the academic and administrative buildings.

All visitors to the United States Military Academy are encouraged to tour the Museum to view what is considered to be the oldest and largest diversified public collection of miltaria in the Western Hemisphere.

West Point Museum is free to all.