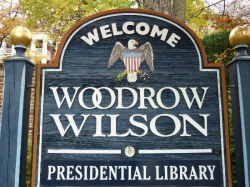 The Woodrow Wilson Birthplace is referred to as The Manse, which is the name of a Presbyterian minister's home. The Manse was constructed in 1846 by the Staunton First Presbyterian Church. It has twelve rooms with twelve fireplaces, and cost about $4,000 (equal to $104,993 today). The Wilson family moved into the house in 1855. At that time the family only consisted of his two parents, Jessie Woodrow Wilson and Joseph Ruggles Wilson, and their two daughters Marion and Annie, who were about four and two years old, respectively. Thomas Woodrow Wilson was born in what is now called the "birth room" on December 28, 1856. The Wilsons left The Manse in early 1858 when Joseph Wilson accepted a call from a congregation in Augusta, Georgia.

After the Wilsons moved out of The Manse it remained a Presybterian minister's home well into the 1920s. It was only after Woodrow Wilson's death that his widow, Edith Bolling Galt Wilson, returned to Staunton with plans of creating a memorial. The house was restored to its 1850s look over the next 80 years, which included removing bathrooms, changing light fixtures, and stripping paint. Recently The Manse was restored to its original red brick, having been painted white for almost a century.

It was added to the National Register of Historic Places in 1966. It is located in the Gospel Hill Historic District.