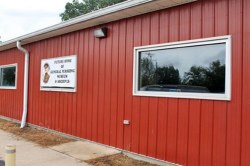 For over seventy years, the Pershing Park Memorial Association (PPMA) has dedicated itself to keeping the memory of General of the Armies of the United States John J. Pershing alive. Our mission is to construct a living and lasting memorial to the extraordinary service and sacrifice of General Pershing.

One strategic component remains. We have nearly reached our goal with the 2011 purchase of a 7,800 square foot building in Laclede, Missouri. This structure will be the Pershing Memorial Museum and Leadership Archives.

The Pershing Memorial Museum and Leadership Archives will interpret Pershing's life for visitors - from the time young Cadet Pershing arrives at West Point Military Academy through his life, career, and ascension to the highest rank and title ever awarded to a United States Military Officer while alive, General of the Armies of the United States.

The museum will interpret history in a way that is accessible to today's scholars and students. The modern exhibit gallery will display educational, hands-on, and interactive displays spanning General Pershing's life and military career. A flexible theatre space will accommodate small groups or expand for larger audiences. We anticipate the viewing of restored World War I film footage, lectures, conferences, and book signings. The main gallery and a classroom space will allow the facility to feature special exhibits and traveling displays.