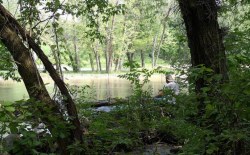 When citizens of Laclede first expressed an interest in honoring Gen. John J. Pershing, commanding general of the American Expeditionary Forces during World War I, the most suitable tribute seemed to be a park encompassing the land that Pershing loved to roam in his youth. In 1937, the state purchased the first tract of land, setting in motion the preservation of what is considered a rare natural jewel in a predominantly agricultural landscape.

In the middle of the day-use area sits a monument to all the mothers who gave their sons to war. Dedicated by the American War Mothers of Missouri in 1940, the marble statue is a fitting tribute to the memory of those who gave sons to World War I and all wars. John Schlitz, an inmate in Leavenworth, Kan., carved the statue, which was dedicated the same year the park opened.

Gen. Pershing spent many boyhood days playing and hiking in the area that now makes up the park, and today visitors can enjoy similar experiences.

Staff are usually available in the park Monday through Friday. The office telephone is monitored for messages during daytime hours.
Park Office hours

Staff are usually available in the park Monday through Friday. The office telephone is monitored for messages during daytime hours.