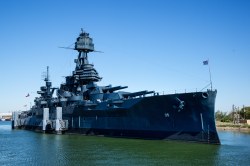 The Battleship TEXAS is the last dreadnought in existence in the world, a veteran of Vera Cruz (1914) and both World Wars, and is credited with the introduction and innovation of advances in gunnery, aviation and radar. Having been designed in the first decade of the 20th century, (keel laid in 1911 and completed in 1914), and having seen action in some of the most intense and critical campaigns of WWII, she is an important piece of our naval and maritime history.

After the United States entered World War I, she spent the year 1917 training gun crews for merchant ships that were often attacked by gunfire from surfaced submarines. Texas joined the 6th Battle Squadron of the British Grand Fleet early in 1918. Operating out of Scapa Flow and the Firth of Forth, Texas protected forces laying a North Sea mine barrage, responded to German High Seas Fleet sorties, fired at submarine periscopes observed by multiple ships, and helped prevent enemy naval forces from interrupting the supply of Allied forces in Europe. Late in 1918, she escorted the German Fleet en route to its surrender anchorage and escorted President Wilson to peace talks in France.