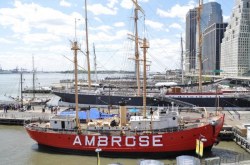 The United States Lightship LV-87 (also known as AMBROSE) is a lightship built 1907 and served at the Ambrose Channel station until 1932. Lightship LV-87 was built as a "floating lighthouse" to guide ships safely from the Atlantic Ocean into the broad mouth of lower New York Bay between Coney Island, New York and Sandy Hook, New Jersey-an area filled with sand bars and shoals perilous to approaching vessels. During World War One her navigation lights helped guide US warships and military convoys into and out of New York Harbor.

LV-87 was decommissioned on March 4, 1966 from the Coast Guard after 59 years of service. In 1968 she was given to the South Street Seaport Museum in Lower Manhattan. Currently she is moored at Pier 16 on the East River and is used as a floating exhibit. In 1989, the lightship was declared a National Historic Landmark.