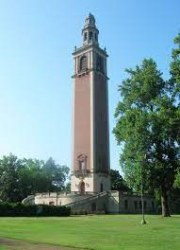 Between 1924 and 1928, the Virginia General Assembly acted to create a World War Memorial Commission and build a lasting memorial to the heroic efforts of Virginia's World War I servicemen and servicewomen.

The City donated a building site in Byrd Park. The War Memorial Carillon is 240 feet high and The Carillon instrument was built by John Taylor Bell Founders of England.

The Carillon Tower originally carried sixty-six bells, but played fifty-three notes - the top thirteen notes had duplicate bells in an unsuccessful effort to produce a louder sound. When the carillon was renovated in the early 1970's, the thirty-four bells which played the highest twenty-one notes were recast into twenty-one new bells with thicker profiles than the originals, producing a better sound. Now there are fifty-three bells for fifty-three notes.