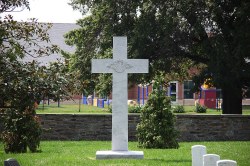 During the period from April 1920 through July 1921, the remains of many servicemen buried in Europe during World War I were disinterred. These remains were either reinterred in selected cemeteries in Europe or returned to the United States. Of these, the remains of about 2100 were reinterred in Arlington National Cemetery, specifically, in Section 18. Through the efforts of the Argonne Unit American Womens Legion, the Argonne Cross was erected to their memory and in their honor. It is situated in the southwest corner of Section 18 and faces east. A grove of 19 pine trees are on 3 sides of the Cross (North, West and South). These trees are symbolic of the Argonne Forest where many of the men fought. At the juncture of the arm and stem of the cross is carved, in low relief, an eagle and wreath.

The inscription on the east side of the base reads:

The inscription on the west side of the base reads:

Erected through the efforts of the Argonne Unit American Womens Legion