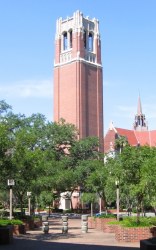 Century Tower is one of the most identifiable features of the University of Florida campus. The dream of building a tower began in 1953, when alumni sought funds to construct a monument in memory of students killed in World War I and World War II. The tower also commemorates the 100th anniversary of the founding of the University of Florida in 1853. The fund drive resulted in the construction of the 157-foot-tall tower, completed in 1956.

Detecting your location...
No information to be displayed !
American Legion post
Brick