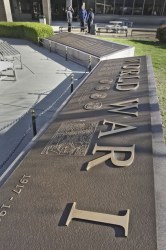 The Pete Wheeler Georgia War Veterans Memorial Plaza is located near the State Capitol in downtown Atlanta. It includes a World War I Memorial honoring Georgians who served, including 1,937 killed in action and 3,319 wounded in action. An estimated 77,000 Georgians served in the military during World War 1. Named for Brigadier General Pete Wheeler, a World War II veteran who was a long-time commissioner of Georgia’s Department of Veteran Affairs, the plaza contains memorial plaques to Georgians who lost their lives in service in each of America’s wars, from the Revolution through Iraq and Afghanistan.