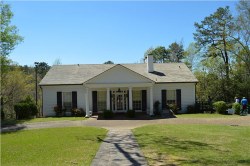 The Georgia home of Franklin D. Roosevelt, U.S. President during World War II.  Roosevelt first came to Warm Springs in 1924, hoping to find in the area’s warm springs a cure for the polio (infantile paralysis) that had struck him in 1921.  He built the Little White House in 1932 while governor of New York, came here often on retreat during his presidency, and died in the home on April 12, 1945.  Roosevelt served as U.S. Assistant Secretary of the Navy in the Wilson Administration, and was a forceful advocate for U.S. entry into World War I, putting him at odds with many of his administration colleagues.